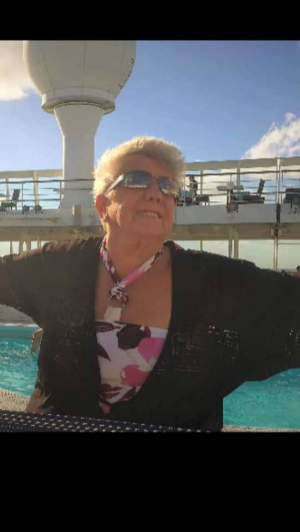 Margaret R. Kerns (nee Murphy) "Peggy" passed away at home on January 26, 2020 surrounded by her loving family. She was 82 years old. Peggy was a vivacious woman who lived a fun filled life. As one of her friends said, "Peggy was a cool cat". She could light up any room.

Peggy grew up in Fairmount and later moved to Harrowgate after marrying Joseph Kerns. There she raised her three children Margie, Joseph, and Chris. Peggy worked as a waitress for years at the Marriott and Silvies. She was also a bartender for some time while living in Philadelphia. She retired to North Wildwood and began a new career as a waitress at the Elks which she loved as she was able to socialize with her customers and friends so it did not seem like "work". She was a great joke teller and story teller and people loved to be in her presence. She loved music, dancing, the theatre, and old movies. She spent much of her time as a member and volunteer with the Emerald Society, the Knights of Columbus, The Dollies in Philadelphia, and the Elks 1896, where she played shuffleboard and darts and loved all of her teammates. She also looked forward every year to the "Elks Got Talent Show".

The most important thing in Peggy's Life however, was her family. She was the matriarch and loved her brothers and sisters, children, grandchildren, nieces and nephews and extended family. "We know heaven is welcoming her with open arms. Rest in Peace, Peg. you will be missed.

To send flowers to the family or plant a tree in memory of Margaret "Peggy" R. (Murphy) Kerns, please visit our floral store.